Outdoor enthusiast and video professional Franz Walter gives us a peek into his creative projects.

Hi Franz! Can you start by telling us a bit about your production company?

I've been a professional videographer and photographer in Bavaria, Southern Germany for the last 17 years. I started to run my company back in 2008 and for the first 10 years, I focused on outdoor productions. I collaborated with outdoor brands and professional athletes to join them on expeditions and trips. Some of these clients include Adidas, Arc’teryx, Salewa, Ortovox, Lowa, Edelrid, Red Bull, and more. I’m normally outdoors, filming people climbing, or doing other crazy stuff in nature.

What have you been working on most recently?

Last year, I was hired by my local city council to create a mobile app using augmented reality so viewers could have an enhanced experience at the Bergbauernmuseum Museum and City Museum of Immenstadt. They contacted me because I was local, and they asked me if I’d be interested in content production for the app.

What led you to Runway?

I found Runway on Hacker News. I started the traditional route, going with After Effects and the basic toolkit I've been using for many years. I tried DaVinci Resolve as well, and tried that with masking. The project involved a lot of green screen, like way more than any of the projects I've worked on before. I was frustrated because it all took too long. That’s where Runway came into place.

Can you show us some of the work you did on Runway? 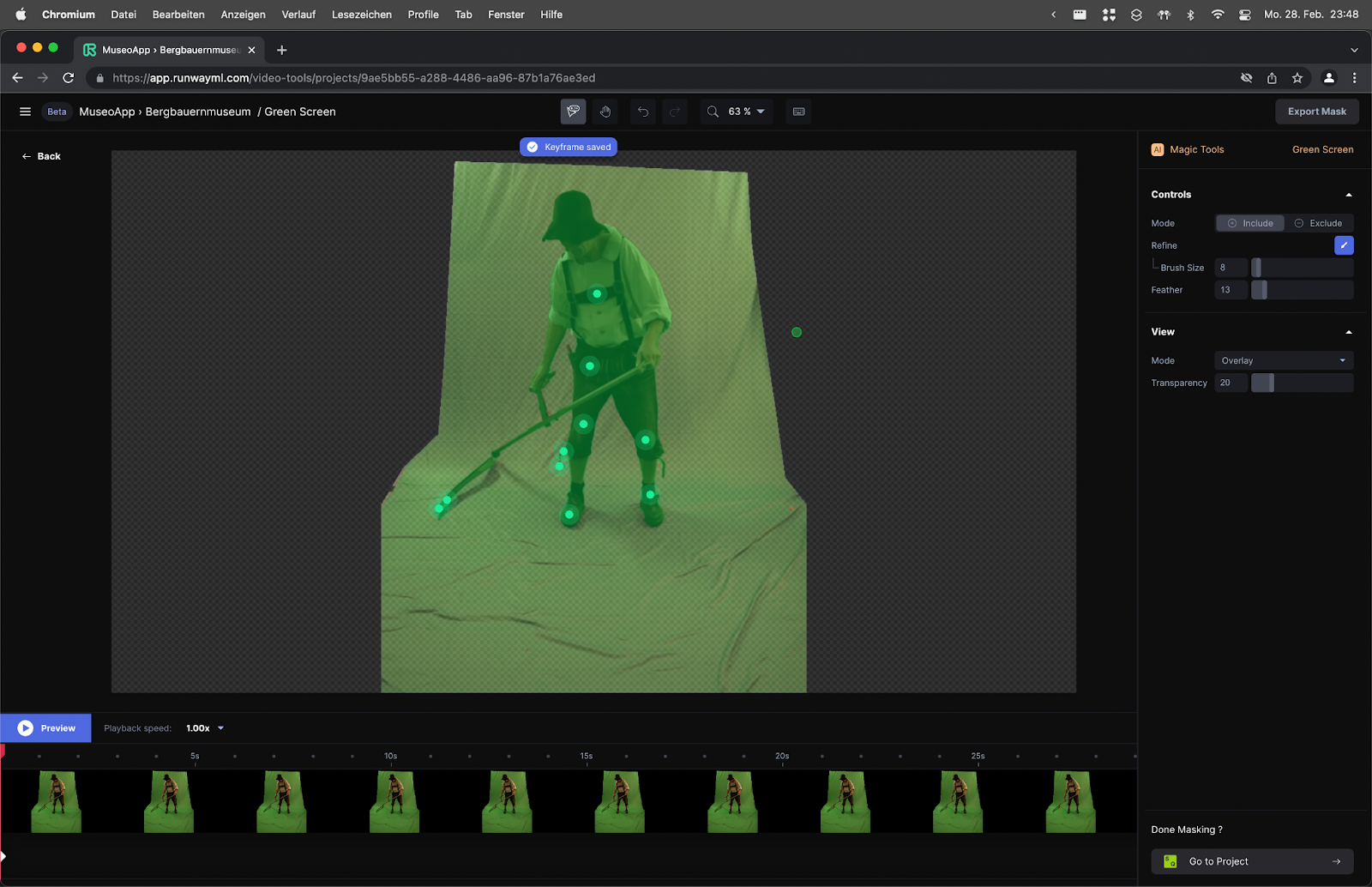 This was one of the prototypes. At the end of the day, what I needed to deliver was an asset for the app to work and to make the masking work. This is one of the prototypes. And the awesome thing about Runway, is that I didn't even need to put up a green screen in the background of the guy. So I just more or less went home with him. We dressed him up like this. I recorded the test setting, loaded it up to Runway and then exported these two assets. I used it more or less right in the app and gave it a try.

What about ML excites you?

I have always been into collages, bringing together different pieces in order to create something new. This is what brought me from photography to filmmaking (expanding the artistic space and coordinate system). And now, with ML tools available via a great UI, alongside AR/VR/XR slowly becoming mainstream, I consider this a very interesting space for new commercial and personal works.

What do you see as the future of AI in content production?

What I'm really interested in, is trying to think of creative ways in terms of narrative storytelling, where there is a potential here to use stuff like this and in particular in combination with virtual reality, augmented reality, that kind of stuff.

What are you excited about doing next?

Now that I know Runway a bit more, I have an idea. You walk around the town here, and there are a lot of statues and art pieces throughout the city. There’s one fountain where there are five or ten bronze birds arranged around it.

I always thought, how can we make it happen that you point your device and these creatures because an object detection in a way? I’ve always thought it was just impossible. It's so much labor, and at the end of the day, time and money involved to do a custom-made individual modeling of these pieces.

But now, I think step one would be object detection and object removal, which Runway is already offering. I think what’s interesting is once you have this information regarding the object and the object depth, how can you use it in a creative way?

That’s what I’m thinking about.

Share
Everything you need to make content, fast.
START CREATING NOW
All from your browser. No downloads required.